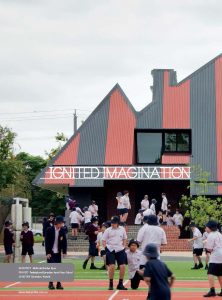 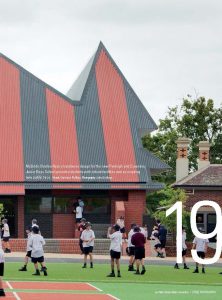 McBride Charles Ryan’s design for the new Penleigh and Essendon Junior Boys School is an outstanding result of the Federal Government’s Building the Education Revolution (BER) initiative. Drawing inspiration from its surrounding suburban setting, the silhouette of a federation house type is ‘blown up’ and distorted with wit and whimsy to spark the imaginations of the boys.

McBride Charles Ryan (MCR) has proven to be a leading educational architect, having won a suite of awards for its innovative designs for Fitzroy High School (2009) and Templestowe Primary School (2004). In its infancy, the school still awaits the awards it deserves. It has been shortlisted for a yet-tobe- announced World Architecture Festival (WA F) Award and has already scooped the 2012 Horbury Hunt Award – Commercial (Built).

The school grew out of a commission the practice had previously received after winning a limited competition to design the senior school building for Penleigh and Essendon Junior Boys School (PEGS). The school felt MCR was an ideal candidate to also design the junior school after the rolling out of BER funding.

The PEGS Junior building provides an inspiring new home for the Year 5 and 6 boys. Where the practice’s design for schools like Fitzroy High School showcased flexible learning spaces in line with current teaching sciences, the brief for PEGS Junior called for a more traditional approach with well-defined, separate classrooms that suited the school’s teaching methods. This demanded a simple two-storey building with four classrooms including breakout spaces on the ground floor for the Year 5 students, and similar upstairs spaces for the Year 6 boys, which the practice says “seems fair, a bit like a top bunk”.